WHAT HAS 2020 TAUGHT US ABOUT CIVIL RIGHTS?

The shooting of Anthony Vargas is one of two lawsuits targeting the Banditos in East L.A. Court documents allege members have matching tattoos of a skeleton holding a smoking gun and that the Banditos ran the station – controlling dispatch and harassing deputies who refused to join.

From homelessness in the Los Angeles County and the killing of George Floyd, Humberto shares the way in which the U.S. system is built to often dismiss victims of police misconduct and what changes can be implemented to allow the U.S. to progress and evolve in 2021.

Unfortunately, during the pandemic there have been an increase of police shootings and killings, at least that is what we see here in Southern California. Most of the people getting killed or mistreated are people of colour, although non-minorities are also being killed and victimized by police misconduct.

It appears there is less accountability in law enforcement, as shootings and use of force cases against civilians appear to be at an upswing instead of decreasing.  I do not know if it has to do with politics, but I do know that the courts are increasingly using the defense doctrine of qualified immunity to throw cases out of court.  This is a conservative doctrine the appellate courts have been using to dismiss many cases.  Then with the fact Trump has loaded the courts with conservative republican appointees I believe this emboldens police officers to believe they can act with impunity knowing the courts shield them from liability regardless of their misconduct.  This doctrine of qualified immunity appears to have little chance of being reversed by the Supreme Court, as the court is currently comprised by a conservative majority.

The Memorial Day killing of George Floyd caught on video shows a systemic problem that exists in America.  People all over the country protested not only because of George Floyd, but they were also venting over the continued killings of people of colour in our country. The Floyd incident also sparked a call for change in our country, the main call being systemic inequality in the application of criminal laws and punishment.

One of the primary concerns is the growing number of people facing homelessness.  It is a problem that affects everyone because the homeless population is extending out to the suburbs.  This is a human rights issue which we should all work on.  There is no excuse for the most powerful country in the world to have so many people living on the streets.

The systemic inequality in the criminal justice system and employment needs to change. Unfortunately, in police shooting or excessive force cases, lawyers are basically prosecuting a case against the perceived good side of society. Law enforcement officers are those individuals that are charged with the responsibility to protect us from evil, enforce our laws and keep us safe. A large percentage of Jurors and some judges are highly protective of law enforcement officers and will generally favour them over the common average person and it is worse if your client or the decedent is a meth user with a criminal history.  For this reason, jurors can be in favour of a police officer against a plaintiff, even where as a lawyer, you have done everything to prove liability and such liability appears clear.  The expansion of the concept of qualified immunity in the federal courts poses a continuing challenge to all lawyers that handle such claims in the federal court system.  A solution that some of us which practice in this area of the law opt for is to bring the cases in state court and avoid the federal judiciary, as the concept of qualified immunity does not apply under California State law.

Our Justice X legal group was developed to develop legal strategies to address systemic inequality. As a founder of this group I am active in the implementation of plans and litigation of issues that address systemic inequality.  Our group attempted to intervene in the large class action lawsuit that was filed against the County of Los Angeles by homeless activists.  Although we were not allowed to intervene, we were invited by the judge overseeing the lawsuit to sit at the table in the discussions that will come up with ideas and solutions to the problem.

I am also one of the lead counsels in the class action lawsuit against the City of Los Angeles that addresses the harm that has been done to innocent civilians that were illegally categorised as gang members.

I have 25 wrongful death cases involving allegations of excessive force or misconduct by law enforcement agencies.  By litigating these cases to a successful resolution, it is my hope that we can influence change and bring justice to the families that have been harmed.

The termination of the draconian application of the gang enhancement statutes and systemic equality in the administration of justice in the criminal and civil courts.

I am also one of the four founders of the Justice X Legal Group and the Protestors Defense Alliance, (PDA).  The PDA is a non-profit legal aid service which was established in order to provide free legal services to protestors that were arrested in response to the infamous live killing of George Floyd in May 2020.  We were able to recruit approximately 150 lawyers from all areas of the law that are willing to provide free legal representation to protestors.  Our PDA motto is that we can only secure peace by providing justice to the protestors.  The Justice X legal group consists of a coalition of black and brown lawyers committed to fight systemic inequality through legal advocacy.  Currently under Justice X, we are leading a class action lawsuit representing hundreds of victims subjected to the illegal classification as “gang members” by the against the City of Los Angeles and the Los Angeles Police Department.  Our Justice X Legal Group is also involved in the litigation against the County involving homelessness.  Finally, through Justice X we are developing an educational program for inner city high school students. The goal of the program is to have female lawyers of colour act as mentors to young females in order to educate them and train them to pursue a legal career and act as proactive leaders in their communities. 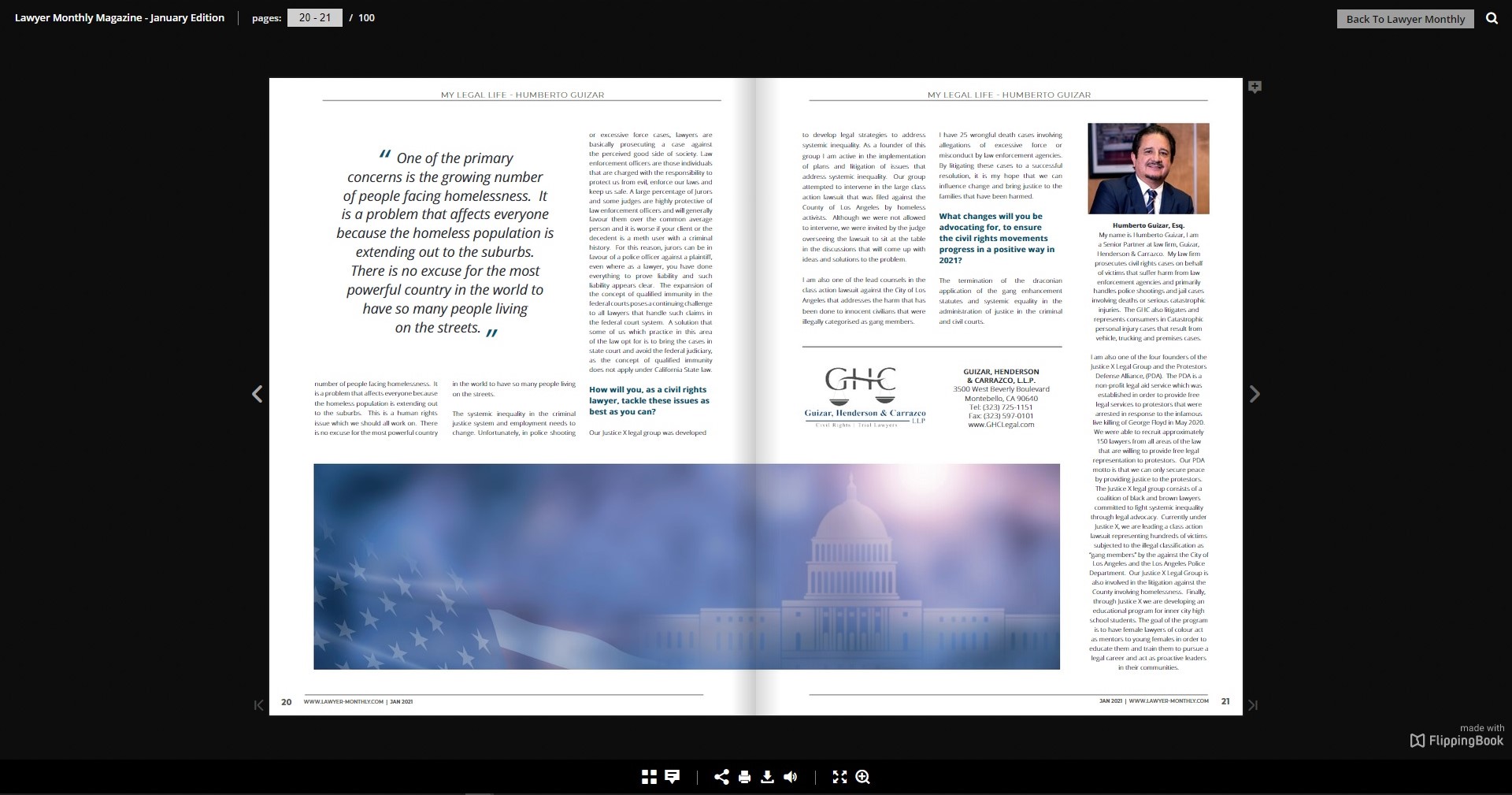 Special Thanks to Lawyer Monthly and Justice X 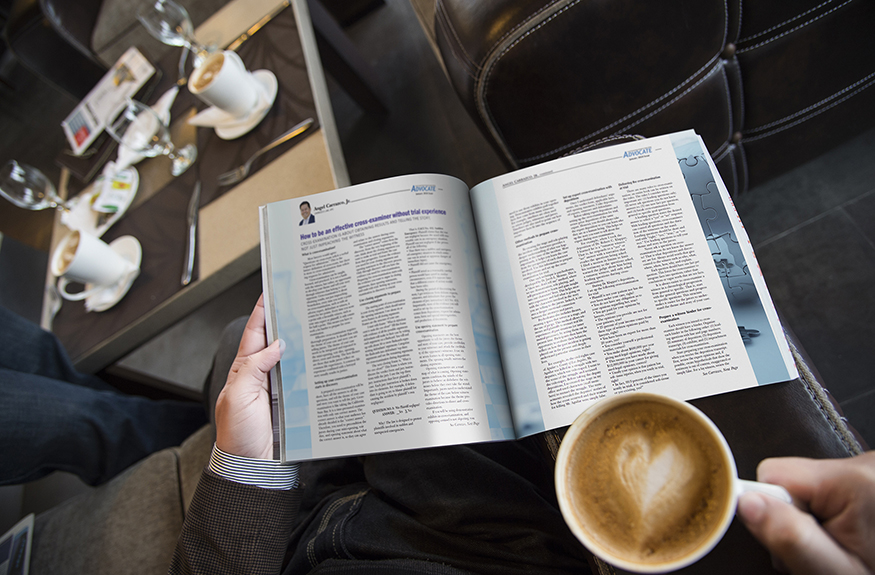 How to be an effective cross-examiner without trial experience